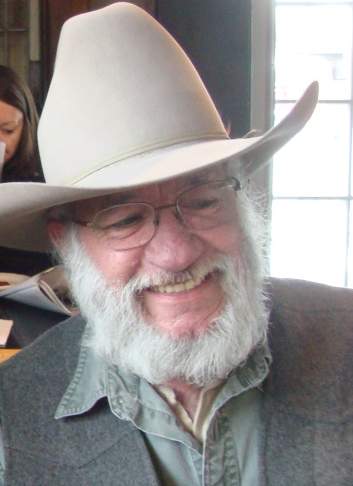 Hey Friends, pull up a chair! We have a tale to tell about one of the greatest men around. David Flatberg was his name. If you had the pleasure to meet him, your life surely changed. One conversation with David and you would never be the same!

David was born December 1, 1947,  adopted about 1950 by Orrison Megard and Catherine Dalgleish Flatberg from St. Anne's Orphanage in Salt Lake City, Utah. His brother John soon arrived and their little family was complete, growing up on the Salt Lake City streets. David was an average boy. He went to school and did his chores.

While playing with the kids next door, a young girl caught his eye. He chased and chased this girl for years, wearing down her defenses. When she finally said yes, David's heart was defenseless. He married Susan Fallentine on September 6, 1968. Soon after Susan became pregnant. They had two beautiful daughters and named them Jenny and Anne. David would tell you every grey hair on his head came from his beautiful daughters. He would laugh and smile and say, "but I wouldn't change a thing."

David would get up every morning putting on his boots, not a tie. He would head out to lay the pipes and sweat the copper because he loved being a plumber and pipefitter. Dave belonged to UA Local #19/140. When he talked about his union, Dave's chest would puff up with pride. David was a military man with the national guard. He didn't talk about it much because he would always break down and cry. As years went by, he watched his girls grow into amazing women.

His oldest girl Jenny married a strapping lad Bruce, and David couldn't have been happier. Celeste soon arrived and with a tear in his eye he held her tight and realized he had become a grandpa! Unfortunately, Susan never got to meet her granddaughter and when she left, she took a part of David with her. 44 years he cherished her dear and did til the day he died. His baby girl Anne left home in a van to head out and spread her wings. She landed in the Tetons, and oh! what an incredible place. David packed up his house as quick as a mouse to make Driggs his new home. He would sit in his chair and stare at the grand and say "emerson nice tetons." If you knew Dave well, he always had a dirty joke to tell and we can guarantee you he wasn't talkin' about the mountains.

Anne met a beau and with Skippy in tow, she brought him home to meet her daddy. A couple years later, Skippy asked for her hand and of course Anne said YES! David swelled up with pride and once again cried because he knew she had found her mate. Sadly, David won't be making it to the wedding. With a smile on his face and all the love here in place he flew away on the wings on an eagle on May 17, 2021.

If you're like us, you would ask yourself why would such an incredible man leave us behind? It wasn't by choice. The cancer was eating him alive. But don't worry, friend, he was tough 'til the end and wasn't scared to die. He did have a wish and we are hoping y'all will help us make that wish come true. Please join us on June 12 to lift our glasses high in his memory and watch his baby girl get married! When you come please tell a joke and always enjoy David's favorite season!

Dave is survived by family: Jenny, Bruce, and Celeste Lambson, Anne Flatberg and Skippy Bell, John Flatberg, aunts, an uncle, cousins, in-laws, nieces and nephews. He is survived by many friends, including: Chris Samm, the Larssons, River and community at Teton Valley Senior Center, UA #140, and Tiffany with Solace Hospice. He is survived by music lovers and poets, the sunrise, and animals. Dave will return again and again.

To order memorial trees or send flowers to the family in memory of David Flatberg, please visit our flower store.