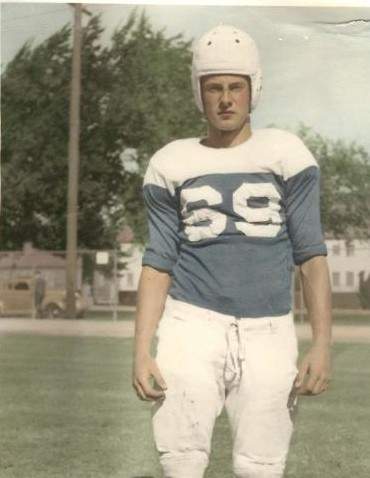 Tom Milligan passed away on Tuesday June 22 with his daughters Tami, Kelly and a hospice nurse at his side.  It was not peaceful.  Tom was born September 26, 1925 in Stockton CA to Bill and Juliet (Thatcher) Milligan.  He had a younger sister Wilma.  Tom and Wilma spent their summers camping and fly fishing on Lake Alpine in the Sierra Nevada. This instilled his life long love for all things outdoors and fishing.  Tom attended Stockton High School home of the Tarzans.  In his senior year of 1943, Tom was the star football player for the Tarzans.  He and his teammates won the California State Championship.  In that final game he intercepted passes, made key tackles and blocks, and even scored two touchdowns.  The family can recount the entire game story if anyone wants to hear.

Tom was recruited by College Pacific in Stockton for college football but he had to put that on hold for World War II. In March 1944 Tom entered the navy and was a radioman third class on the USS Caledonia, an ammunitions supply ship in the Pacific.  He had some great experiences and some harrowing ones.  He was on duty when the war was declared over and got to alert his entire crew that they had won.  He again had great stories about his time but the bottom line was that in war, he felt, there are no winners.

He returned home to Stockton to take up his college football career but soon found out he was not the same person he was when he left for the war and football was no longer for him.  He heard from a friend about forestry school and ended up in Missoula at the University of Montana (although back then it was known as Montana State University-Missoula).  He graduated in 1953 with a degree in forestry and the fame of having the first ski tracks down the M hill on campus.

Tom started smoke jumping out of Missoula in 1951. In 1952, he was stationed in West Yellowstone and met a sweet, young high school graduate from Sugar City named Sharlene Thomas.  She grew up to be our wonderful mother and Tom’s great companion.  They married in 1956 and Tom got a job with Yellowstone National Park.  Over the next 12 years, they were stationed in several wonderful sub-districts of Yellowstone and had their three children; Tim, Tami, and Kelly.

In 1968 we moved to the Jackson Lake Ranger station in Moran Wyoming where Tom was the North District Ranger.  We spent four idyllic years there and then Tom transferred too Moose as the South District Ranger.  His kids were entering high school and he wanted to be nearer to Jackson so we could participate in sports.  All three kids excelled in athletics and Tom and Sharlene were there to cheer us on. Tom stayed in Moose until he retired in l981.  During his time as a Park Ranger there he was in charge of the backcountry district and the Jenny Lake Mountain Rescue Operations.  Please share your stories at sandtmilligan@gmail.com.  His stories and experiences inspired us all to be the consummate outdoor people we are and the terrified mountain climber Kelly became.

After his retirement Tom really got to work on fishing, camping, backpacking, climbing, skiing and traveling. We’re pretty sure Tom is the first one in the valley to skate ski across the spring crust.  We can’t even begin to thank him for all the hours of enjoyment that has brought us.  He and Sharlene had many memorable trips the highlight being their fishing trip down the Good News River in Alaska in 2003. After Sharlene retired in 1997 they moved to Victor, Idaho and then relocated to Driggs in 2012. They continued their adventures which now included some hard-core golf, until Sharlene died in 2017.

After Sharlene’s death, Tom continued to live in his home in Driggs with daughter Kelly and her husband, David Susong.  He had two beautiful granddaughters, Megan O’Brien and Katie Susong.  He also spent quality time with daughter, Tami and her husband Mike DeGrosky in Missoula, and son, Tim and his wife Kris in Bozeman and grandson’s Russell and Tyler Kennedy and Casey Milligan.  I believe that in 2020, Tom fought so hard to not get COVID19 and to defeat Trump that once Biden was inaugurated and he got his vaccine in April he was just tiered of fighting.  He started sleeping more and eating less.  Thankfully he rallied one last time and watched his granddaughter Megan get married on a beautiful afternoon from his back deck.  She was wearing the gown and veil he had purchased for her for the occasion.  We, his family will be forever grateful and acknowledge how lucky we were to have Tom and Sharlene for our parents.  They lived long and mostly happy and we will remember and miss them daily.

Anyone who would like to honor Tom’s legacy can contribute to the Sharlene Milligan Award through the Community Foundation of Jackson Hole.  Checks can be mailed to C/O GTNP, P.O. Box 170, Moose, WY 83012.

To order memorial trees or send flowers to the family in memory of William Milligan, please visit our flower store.